'Minnequa is My Home:' Principal Harshman Continues to Serve the School She Began Her Career At 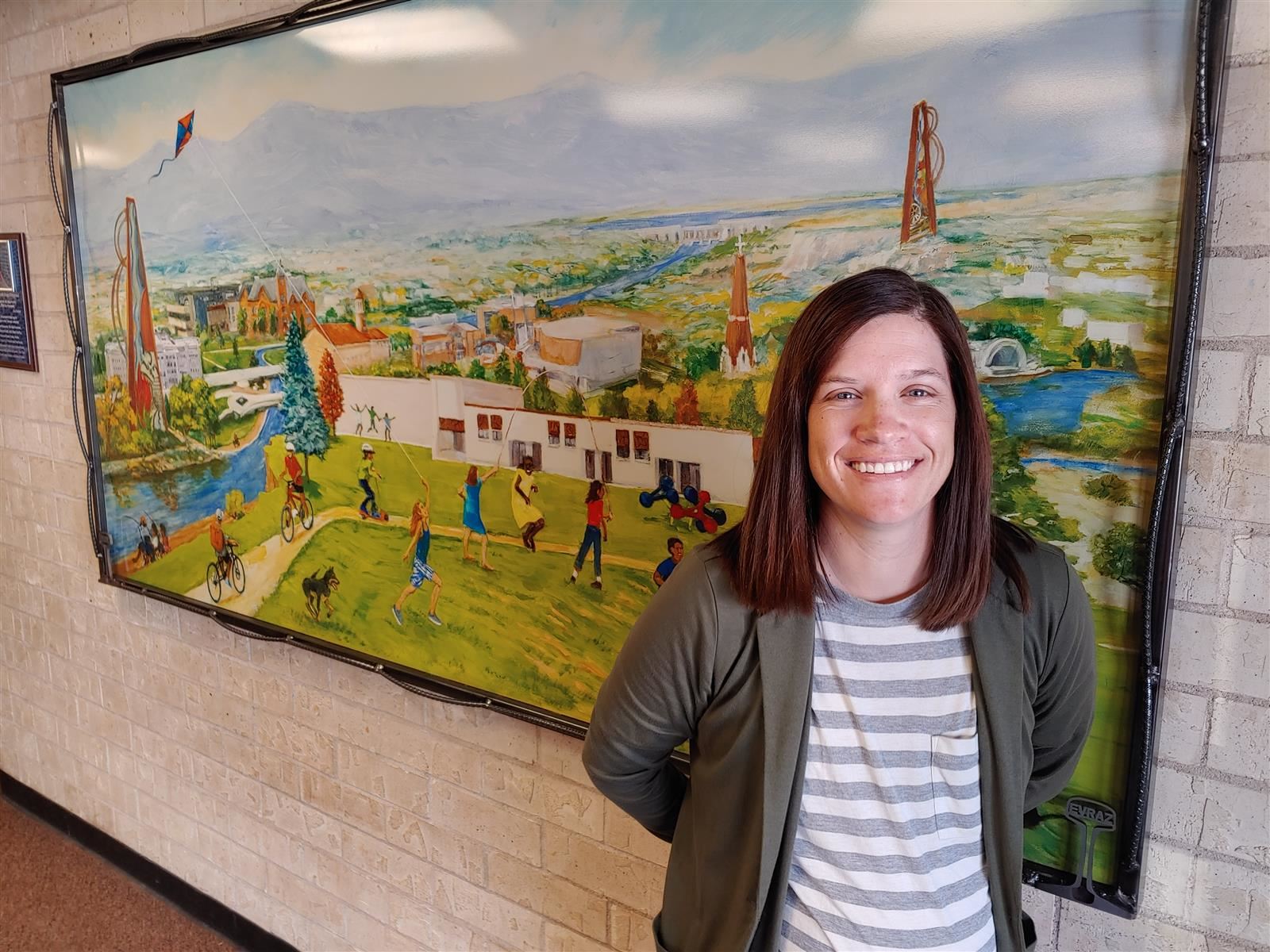 Growing up with 14 siblings to parents committed to serving others, there was little doubt as to what career Katie (Thiebaut) Harshman would choose.

“I grew up with a classroom in our house,” she said. “It was constantly school-like routines and procedures, just to get us fed and in and out the door. And public service definitely tied into that, based on my parents.”

Like her brothers and sisters, Mrs. Harshman is a product of District 60, progressing from Sunset Park Elementary to Pitts Middle School to South High School. A standout athlete, she harbored a dream of becoming a professional soccer player until a serious injury effectively ended those pro dreams and shifted her focus to her schooling.

“When you get hurt like that, your world kind of flashes before your eyes, and you realize there is way more to life than sports,” she said. “I was appreciative of all that sports taught me, but I knew I wanted to give back, and I wanted to give back in Pueblo through education.”

Mrs. Harshman earned a degree from Colorado State University Pueblo while taking to the soccer field one last time.

“Through rehab, I was able to come back and play soccer my senior year,” Mrs. Harshman said. “People told me I would never be as fast, or as good, and I wanted to prove them wrong.”

As her own elementary school teachers had impacted her in a life-affirming manner Mrs. Harshman elected to work with young children. Her first job out of college was as a Reading Interventionist at Minnequa Elementary School.

“My first day of teaching was nerve-wracking,” she said. “You come out of a 3-month student teaching, if you will, and it kind of hits you: this is your rodeo and you are accountable for these kids. It’s exciting, but you also know how much is at stake.

“I was lucky to be part of such a great school. There was just something about Minnequa that just felt right.”

With a strong embrace of support from administration and her colleagues, Mrs. Harshman quickly found her classroom footing.

“I was excited to be around people who made me look better,” she added. “It’s really about that inspiration.”

Young, ambitious and inspired by the leaders she worked with and observed around the district, Mrs. Harshman made it a goal to impact more students, on a grander scale.

“Having a classroom, you make an impact. But if I could be the leader of a building, I’m making an impact on teachers, who in turn will make a bigger impact on kids,” she said.

In her second year at Minnequa, Mrs. Harshman earned the first of two Master’s degrees: credentials that would serve as a key to her administrative future.

In 2018, an Assistant Principalship at Minnequa opened, and Mrs. Harshman was there waiting with open arms.

“Every job is critical in a building, but I think where the AP job was different was knowing that I was accountable and that we’ve got to get this right for the kids,” she said. “And when you’re an administrator, you’re responsible for 350 kids.

“So the pressure was always there; it just increased.”

After only one year as Assistant Principal, and less than a decade after she started her journey at the school, Mrs. Harshman was named as its leader.

“It was an extremely quick transition,” she said. “I knew I had the learning and the support, but my fear was of letting someone down. If I was going to do this, I knew I had to do it right: for the kids and the staff.

“As Principal, it’s all on you: whether you get something right or wrong, you’re accountable.”

Through continued ardent support from the Minnequa staff as well as veteran Principals in other district schools, Principal Harshman quickly established herself as a confident and personable leader with the nurturing touch of a mother.

From the start of her teaching career, Principal Harshman took a genuine interest in the lives of those under her charge. Now, as building Principal, she was able to extend that care and compassion to the whole of the student body, as well as the families who entrusted the Lil Cats to her care.

Every day, she can be found inside the school’s entrance lobby, greeting each youngster, inquiring about his or her health, and offering a quick compliment or word of encouragement as the children ready themselves for the day.

“I have to tell you: this staff, and these scholars, make it easy to lead this school,” she said. “They make me look better than I am because of their hard work.”

At Minnequa,  the Lil Cat are also “HEROES:” Helpful, Engaged, Respectful, On Task, Empowered and Successful.

“We call that the Minnequa Way and that’s what we live by,” Principal Harshman said. “We ask kids, ‘Are you acting like a HERO? If not, what you are going to do about it?’ In every way we address kids, it’s positive, to encourage them to do the best they can.”

Additionally, Lil Cats are afforded the space and opportunity to discover their interests and find where their passions and purpose lie.

“We do that by allowing kids to grow socially, emotionally and academically, every day,” Principal Harshman said. “Being an Innovation School, we have a lot of extra programs, if you will, and community partnerships that allow us to do that.”

The most important of those partnerships can be found within the walls of the school.

“I’ve got the right staff with me to do the mission,” Principal Harshman said. “Team is critical: one person can’t make or break a school. It takes all of us together – with high expectations and belief – so that kids can flourish.”

When there was talk that Minnequa might face closure, the community fervently rallied behind the school, expressing so much passionate support that any talk of closure soon evaporated.

“Our staff believes in our kids. They believe they can do the work and deserve the opportunity to be at this school,” Principal Harshman said. “And having belief, kids can feel that, and that makes them excited to walk through those doors every day.

“Here, we make it about family. We treat each other right, work hard and have good attitudes. We put forth effort and show success.”

“But the word I like to use the most is ‘dedicated.’ I am dedicated to this school, because it’s my home,” she added. “I love my students, and the way they see me is important. They see me in the classrooms, helping their teachers and engaging with them. But they also see me in the lunchroom, and before and after school, and shooting baskets and playing kickball with them.”

Two of the Lil Cats who enter the building every day are Principal Harshman’s own children: a testament to the quality of education offered at Minnequa and her faith in the staff that delivers it.

“I feel it’s important for my kids to be here at Minnequa,” she said. “It’s not about me, it’s not about the teachers: it’s about the kids. And we put our own interests aside to make sure our scholars are successful. It’s an amazing place to be, and all kids deserve to be here.”

Inside the lobby of Minnequa hangs a colorful and expressive 4 x 8 painting: the fruits of a partnership that encompassed the City of Pueblo, community advocates, EVRAZ and others. With input from the Lil Cats as to what Pueblo and their school community means to them, a local professional artist fashioned the piece: a true collaborative effort which continually generates a sense of pride within the school.

“It’s one thing to receive something, but it’s another to be involved in something,” Principal Harshman said. “And the kids look at that painting and recall the stories, and remember those moments, like when the media was here with the cameras.

“It puts them on the stage, with the joy and the excitement. And we really do need to frame things as positive. We focus too much on the negative in this world when there is too much good out there.”

Of Principal Harshman’s 14 brothers and sisters, nearly half went on to become educators.

“But all are products of D60,” she added. “And when you look at that statistic – 15 kids, 15 products of District 60, 15 college educated, 15 successful careers – it’s a testament to my parents, no doubt, but also to the district. We all went through the same three schools, and it’s a beautiful thing.”

When it comes time to pass the Minnequa reins onto the next leader, Principal Harshman hopes she will be remembered for an unbridled commitment to all who walked the halls.

“I have a saying that ‘true compassion is someone who gives beyond themselves,’” she said. “So I would want people to describe me as someone who gave everything she could to Minnequa, and the scholars and staff in it.”