From 'Kindergarten Cop' to Park View Principal: The Colorful Journey of Floyd Gallegos 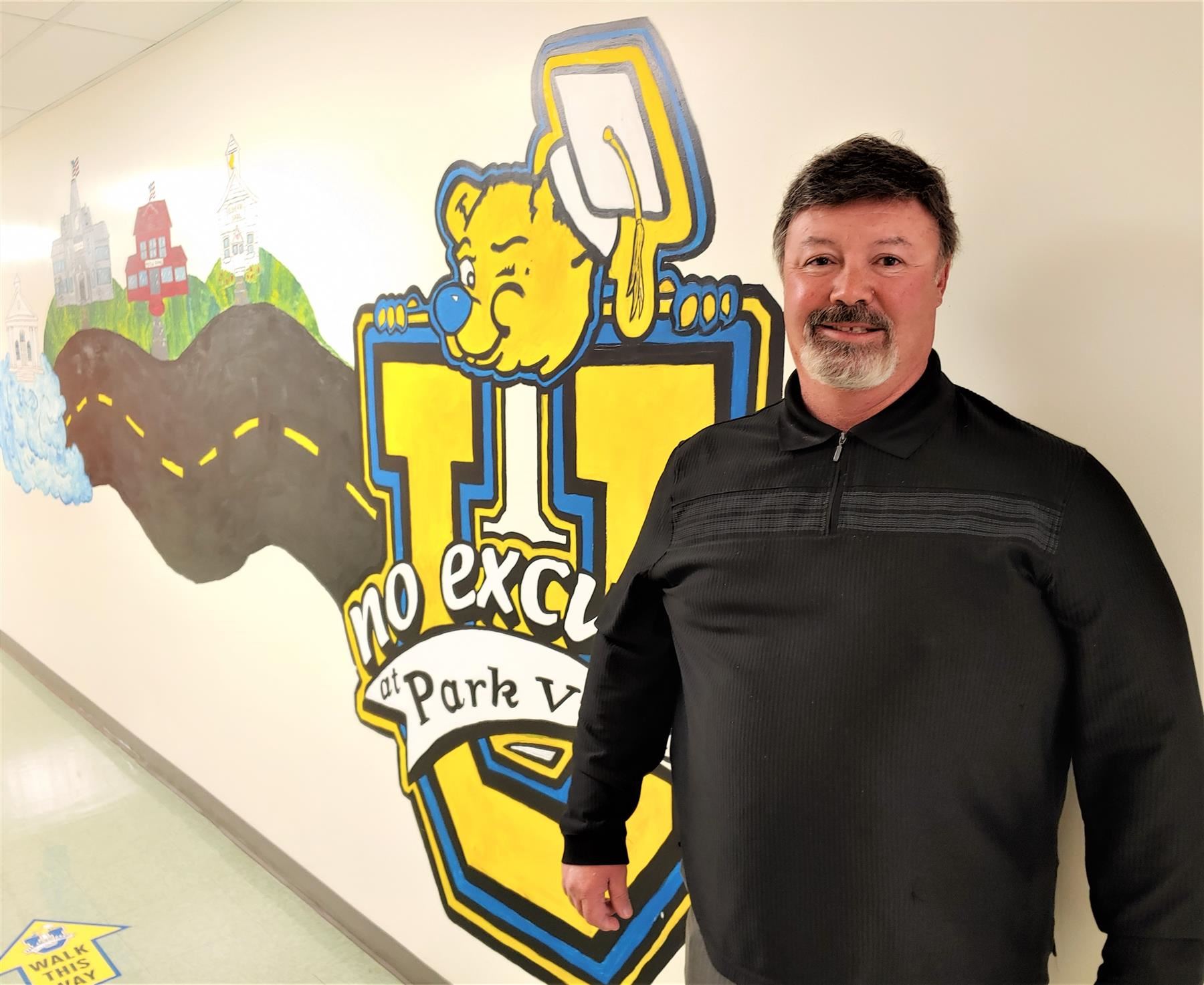 And the label of every one of those hats reads “Servant Leader.”

An East Side native, Mr. Gallegos’ talents, ambition and confidence have taken him around the world and led to enough exciting experiences for a number of lifetimes. Now, in the heart of his latest career, Mr. Gallegos is back on the East Side, continuing his lifetime of service as the compassionate Papa Bear to the hundreds of Cubs who call Park View Elementary School home.

Throughout his life, Principal Gallegos has never shied away from a challenge or a difficult situation. Contrarily, he has embraced every new responsibility entrusted to him with a soldier’s mindset, an athlete’s endurance and a loving father’s heart.

“I was fortunate enough to play Division 1 football at Colorado State University as a running back,” he said. “God blessed me with some ability to run so I was able to play a game and get my schooling paid for.”

In college, Principal Gallegos’ area of study was Criminal Justice with a minor in Recreation.

“I really didn’t know what I wanted to do,” he explained.

After a good friend lost his job in a meatpacking plant, he encouraged Principal Gallegos to enter the service with him on the “Buddy System.”

“The Army had a kicker that for every $100 you put in, they would give you $500,” he said. “And that meant the opportunity for more college if we wished to pursue further degrees.”

Initially, Principal Gallegos served as a Medical Specialist. But on the strength of exceptional test scores, he found himself in the elite Special Forces.

“I served in Germany and guarded the East-West German Border before the Wall came down,” he said.

After his military service ended, Principal Gallegos returned to Pueblo in 1988 and joined the ranks of the Pueblo Police.

While on the force, Principal Gallegos spent some time at Belmont Elementary School in a School Resource Officer capacity. As part of his duties, Principal Gallegos would visit with the students to talk about the perks of being good scholars and citizens.

His easy manner and ability to reach children caught the eye of Belmont Principal Frank Taulli, who saw in Principal Gallegos a natural-born educator.

“While I was an officer, I had earned an Elementary Education endorsement from Colorado State University Pueblo,” Principal Gallegos said. “I’ve always been a coach and loved coaching every sport. So I ended up switching careers again, on the encouragement of Principal Taulli.”

While student teaching at Irving Elementary School, Principal Gallegos was offered the opportunity to serve as a long-term substitute teacher.

At Irving, the one-time police officer took the reins of a Kindergarten class.

“I like to say that I was the ‘Kindergarten Cop’ before Arnold Schwarzenegger,” Principal Gallegos said as he chuckled. “I’m just not as big as he is.”

He later transitioned into the role of Sommerlid’s Physical Education teacher, and spent 6 years helping to shape the bodies and minds of those under his watch.

“Wherever I’m needed, I just go,” Principal Gallegos said of his willingness to accept new duties and responsibilities.

At Sommerlid, Principal Gallegos was named Teacher in Charge by Principal Cindy Muckel, who continually encouraged him to pursue Principal Licensure.

“You are a natural leader,” Principal Muckel often told him.

“But I’m not done coaching yet,” was Principal Gallegos’ response at the time.

Eventually, both Principal Gallegos and his wife Gina successfully obtained the licensing that paved the way to building leadership positions.

Almost immediately after that credential was earned, Principal Gallegos was hired to lead Liberty Elementary School in Rocky Ford. During his solitary year there, the school posted the highest test scores of its history.

“It was a big transition from a PE teacher to a Principal,” Principal Gallegos said. “Instead of directing kids, you have to direct adults. And all the courses you take don’t really prepare you how to put things all together.

“So I kind of reverted to my coaching experience: got a diverse group of people together, put a game plan together and then in place, and then made any corrections if necessary.”

That approach has continued to serve Principal Gallegos well throughout his administrative career.

“My military training also has helped a lot,” he continued. “Especially with Special Forces, you rely on your team. It’s not about me: I surround myself with good people and try to empower them.”

After a successful year at the Rocky Ford elementary school, the then Superintendent of District 60 beckoned Principal Gallegos back to Pueblo to apply for the Principalship at Morton Elementary School.

He won the job, signaling the start of a heralded 17-year Principalship run in the district.

“My first year at Morton was definitely different than my experience in Rocky Ford,” Principal Gallegos explained. “At that time, I had more than 560 kids, in 3 sections at each grade level, that I was responsible for. And I was given high expectations from the Superintendent. The school was underperforming and they wanted me to try and bring it up.”

Once again building a strong and competent team – and bringing his coaching, military and police skills to the table – Principal Gallegos responded to the challenge by turning Morton around.

Two years after taking over, Principal Gallegos found himself in Washington, DC to accept a Blue Ribbon School Award in recognition of Morton’s academic excellence and progress in closing achievement gaps among student subgroups.

In all, Principal Gallegos spent 9 years at Morton, during which time the school received new playground equipment while building a reputation as a strongly supported School of Choice.

“And then I was challenged again,” Principal Gallegos said.

Summoned into the Superintendent’s office, Principal Gallegos was told that his services were needed at Park View Elementary.

“The Superintendent at that time said they wanted to see if my skill set could re-energize the school.”

When Principal Gallegos arrived at Park View, there was a lack of structure and a school culture he didn’t view as healthy.

By chance, he attended a seminar that touted the merits of No Excuses University, which promotes college readiness and student empowerment through the establishment of Six Exceptional Systems.

“During my first year here at Park View, I kind of assessed the situation and our strengths,” Principal Gallegos said. “I met my staff and asked them what needed to change in order to make this an elite school. Then I found No Excuses University and that following year, we implemented it.”

“Our motto here is ‘College is not just the dream, it’s the plan,’” he said. “And when we say ‘college,’ and having them ‘college-ready,’ that doesn’t mean they have to go to college. We tell our kids, ‘You can go to the military, or you can go to trade school: just advance your career other than high school.’

“And I think we’ve been very successful. I’m proud to say that in my third year here, we were the only district school to jump two performance frameworks. I was challenged to get our math scores to where they should be and I took that challenge, putting a plan in place which allowed us to improve our math and ELA scores: which in turn was a contributing factor to us jumping two frameworks.”

Every Thursday, the Cubs and the staff wear college-themed attire, and shout out a college-bound “chant,” to reinforce the achievement mindset Principal Gallegos continually stresses.

“It’s all about giving them the choice and skills to attend college, if that’s what they want,” Principal Gallegos said.

Community partnerships, including one with the Pueblo Police Department, have further solidified Park View’s foundation.

Although he is the owner of a wealth of life experiences, and still boasts the stout physique of an accomplished athlete, Principal Gallegos remains, at heart, “a big kid.”

“That allows me to have fun with the kids,” he said. “I’m out there at recess throwing the football with the boys, or girls, and playing tetherball. I joke with them. Every day, as part of my routine, I visit every classroom. And every day, especially with my primary kids, I do a little cadence – “I tell them to put their hands on their knees and then it’s, ‘Head, knees; head, knees’ – and they get a big kick out of that.

“Trust is such a critical thing, so it’s important that these kids trust in me. Even though I am considered the leader of the building, I want them to know they can rely on me, trust me and talk to me if they have any concerns. I want them to know that being around the Principal isn’t only for disciplinary action.”

At Park View, Principal Gallegos believes that every Cub has the right to learn and accordingly, is given every opportunity to do so.

“It’s about finding out what works best for a kid and then doing it,” Principal Gallegos said. “I’m trying to tap into the strengths of our kids and let them know, ‘You can be anything you want to be.’

“As a servant leader, I am here to help all who are in need. I feel God has blessed me with a calling that allows me to help people, but still hold them accountable.”

When asked by the then Superintendent to take over the Principalship at Park View, Principal Gallegos responded with one request: “I need to bring over at least one of my trusted colleagues, who I can rely on, that can help me implement my plan.”

That ally is Carmen Perez, who continues to serve Park View as a counselor.

“She has been at my side the entire time,” said Principal Gallegos, expressing hope that Counselor Perez will one day take over the Principalship.

“I’m getting ready to retire, and I’d like to have someone in this building that knows the dynamics, knows the programs, and can sustain it,” he said. “Because a good building will continue even if the leader is removed.”

When the time comes for Principal Gallegos to start the next chapter of his accomplished life, he hopes that he will be remembered for being “approachable and despite my stubbornness, that I had a vision and a mindset that we could do anything we set our minds to.

“I also would like to be remembered for always supporting my staff and kids – whether that meant I bought them shoes when in need or just gave them an ‘atta boy.’ And I hope my colleagues will realize I always gave my best effort.”