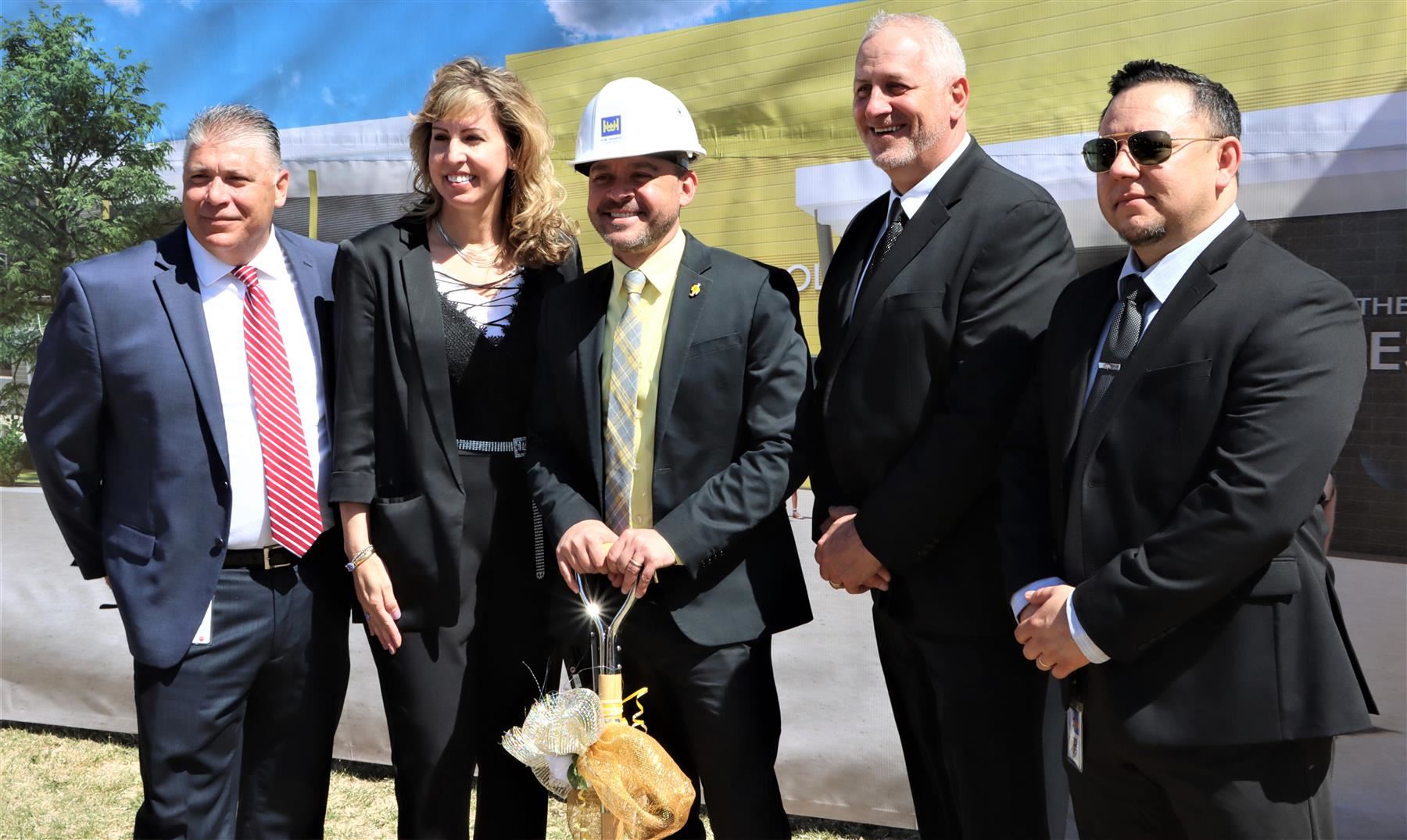 In the initial discussions that followed the release of the District 60 facilities assessment -- which painted a disheartening picture of the condition of aging buildings and infrastructure -- the possibility that East High School might have to be shuttered entered the frame.

Not surprisingly, it was a piece of news that the proud and hard-working East Side community did not take lightly.

With a determined voice, that community, with vigorous support from the East High School Eagle Empire, actively campaigned for its continued presence as a hub of the East Side. And when the District 60 Board of Education courageously elected to place before voters a bond program that included the construction of a new East, the Eagle Empire advocated for its passage with the same fervor and commitment. 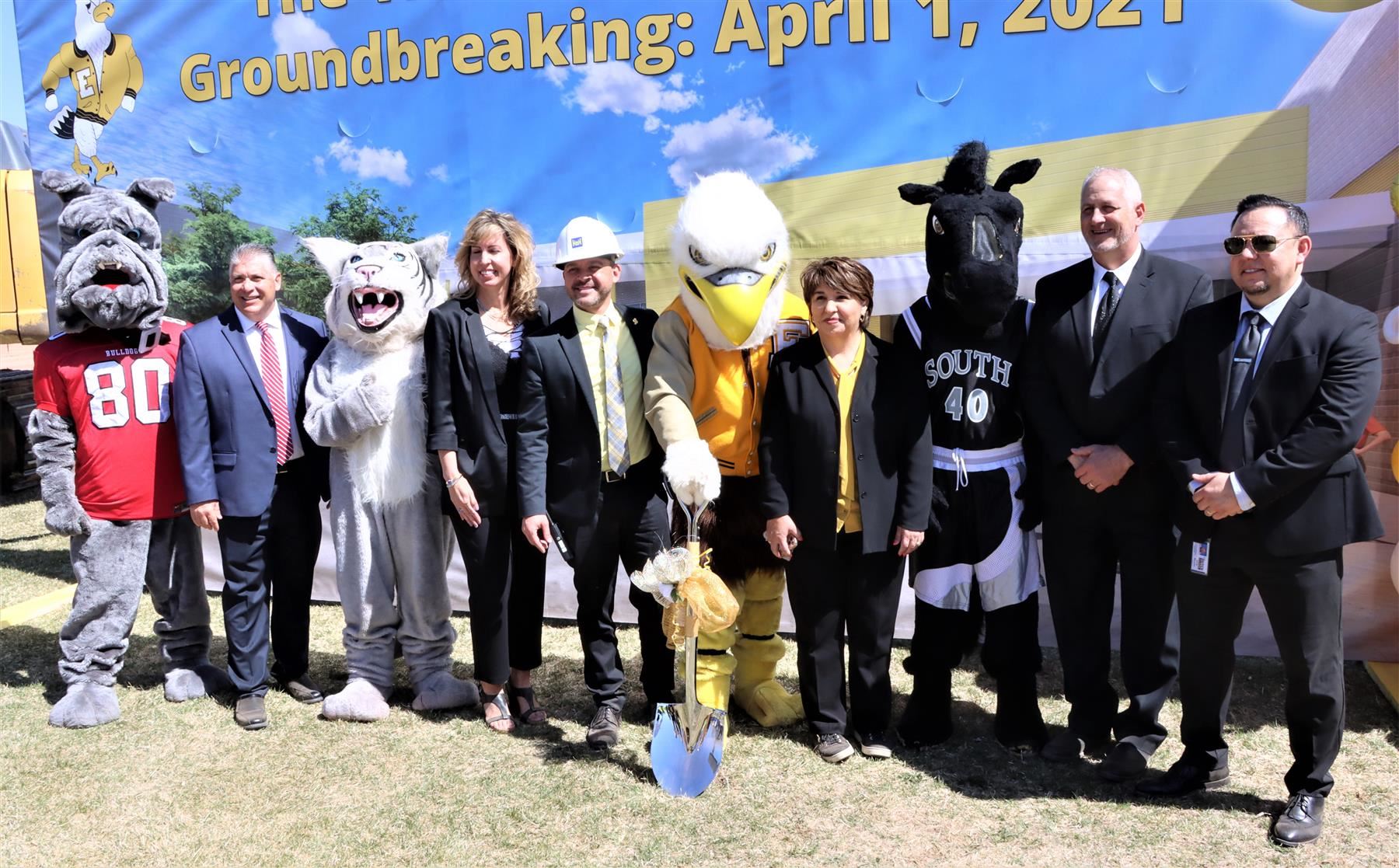 On Thursday, the Eagle Empire was presented with the latest reward of those commendable labors: the breaking of ground for a state-of-the-art multi-level school that will usher in a new Golden Age for the tradition-rich high school on Mac Neil Road.

With heavy equipment, a gold and white balloon bouquet, a large-scale tapestry depicting the facility-to-be and a sign declaring “Thank You Pueblo” as a backdrop, an esteemed group that included Superintendent and East Alumnus Charlotte Macaluso, East Principal Andy Clementi – along with members of the Eagle Empire – and D60 school board members used their ceremonial shovels to dig into the dirt to officially kick off a construction process already underway in the large playing field to the west of the school.

On hand for this historic moment was a rich representation of the East Side as well as the City of Pueblo itself, with a strong showing from current East Eagles and alumni.

Also present were the principals, and mascots, from all of the district’s high schools, as well as principals from East’s “feeder” schools like Haaff, Franklin and Heaton.

For Superintendent Macaluso, a proud East graduate whose ascent to the pinnacle of district leadership is a testament to the hard work and resilience that defines East Siders, Thursday’s ground-breaking was an especially poignant moment.

“If you told me 35 years ago, while I was a student here at East, that I would be up here making this speech, I wouldn’t have believed you,” she told the assembled gallery.

As she did at the ground-breaking for the new Centennial High School on Tuesday, Superintendent Macaluso praised the collaborative effort that allowed for the successful passage of a bond that ultimately will see 2 new high schools, 2 new elementary schools, and a new K-8 school constructed.

“Let’s think about that for a moment,” she announced. “A total of 5 new schools, and repairs and renovations that will keep our other schools operational for years to come, with the majority of the work being kept right here in Pueblo.

“All from one bond: an unprecedented, even history-making achievement.

“Who does something like that? I will tell you who: D60 does that. And I’m proud and humble and grateful to be able to say that I am superintendent of this district.” 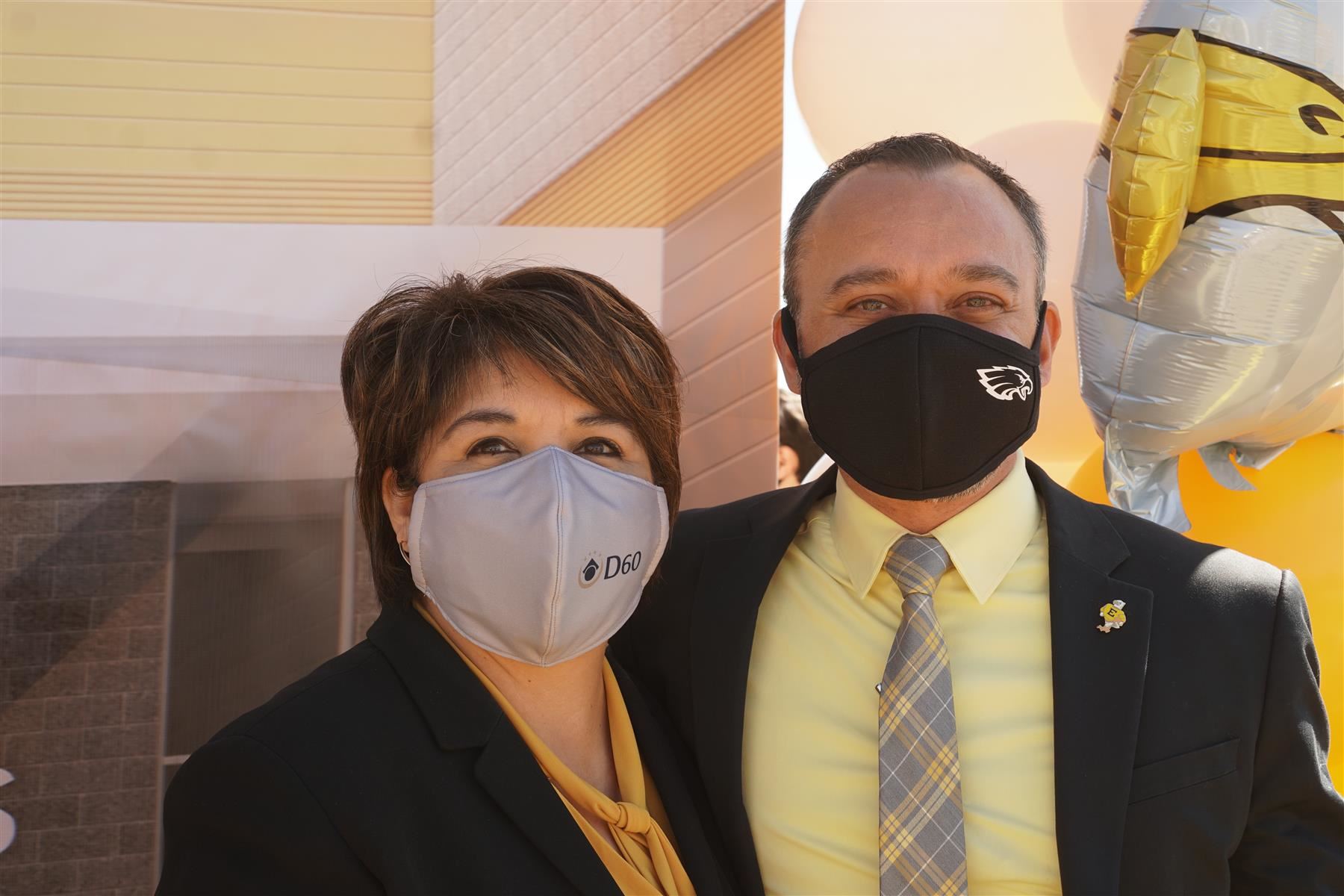 Like Superintendent Macaluso, Andy Clementi is an East graduate who returned to his beloved Eagle Empire to serve as an educator before soaring to the principalship. There was little doubt he was basking in the Golden Glow of Thursday’s ceremony.

“You know, it’s always a great day to be an Eagle,” Principal Clementi began. “But today, especially so.”

In his address, Principal Clementi pointed out East High School’s longtime presence as an anchor of the community.

“East High School is a beacon in our neck of the woods,” Principal Clementi said. “Our students and our community as a whole use our building and facilities year-round. Our excitement for a brand-new facility to serve our part of town cannot be understated. Not only will the East Side and its community retain its high school, the cornerstone of this proud and hard-working part of town will remain for generations to come.

“Tradition has always been a cornerstone of what we do as Eagles. These time-honored traditions will live on, and new ones will surely blossom. And for that, we thank the D60 board of education and district leadership for their vision, the stakeholders who put in countless hours to arrive at a bond question that addressed all needs, and the voters of Pueblo for passing this milestone measure.

As a memento and a keepsake to display once the new school is built, Principal Clementi was presented with a ceremonial plaque with a portion of dirt from the present-day school site.

In his remarks, D60 Board President Taylor Voss said that when the district arrived at a critical juncture in its history, the City of Pueblo rose to the challenge.

“As we worked together to arrive at a bond program, my most pressing concern was to ensure that we did the work upfront to truly involve the community, so that we would know what was most important to its members,” President Voss said. “I felt that we were at a crossroads as a district: we could either take a huge step forward or a huge step backward. My top priority was to present the community with a bond program that they would strongly support.

“The passage of the bond, which ultimately will lead to the building of 5 new schools, is by far the career achievement I’m most proud of. When I decided to run more than 3 years ago, my motivation was that I simply wanted to make a difference. I wanted to have an impact on this community that made me who I am today, and ensure that we keep moving forward as a district. Passing the bond and being able to build 5 state-of-the-art schools is more than I ever dreamed of being able to achieve.”

On hand for the ground-breaking was Larry Atencio, an East graduate who now serves the East Side as its representative on City Council, and his granddaughter Kayla Valdez, an East sophomore who plans to graduate from the new school now being built.

“And that’s the reason East High School is so important.” 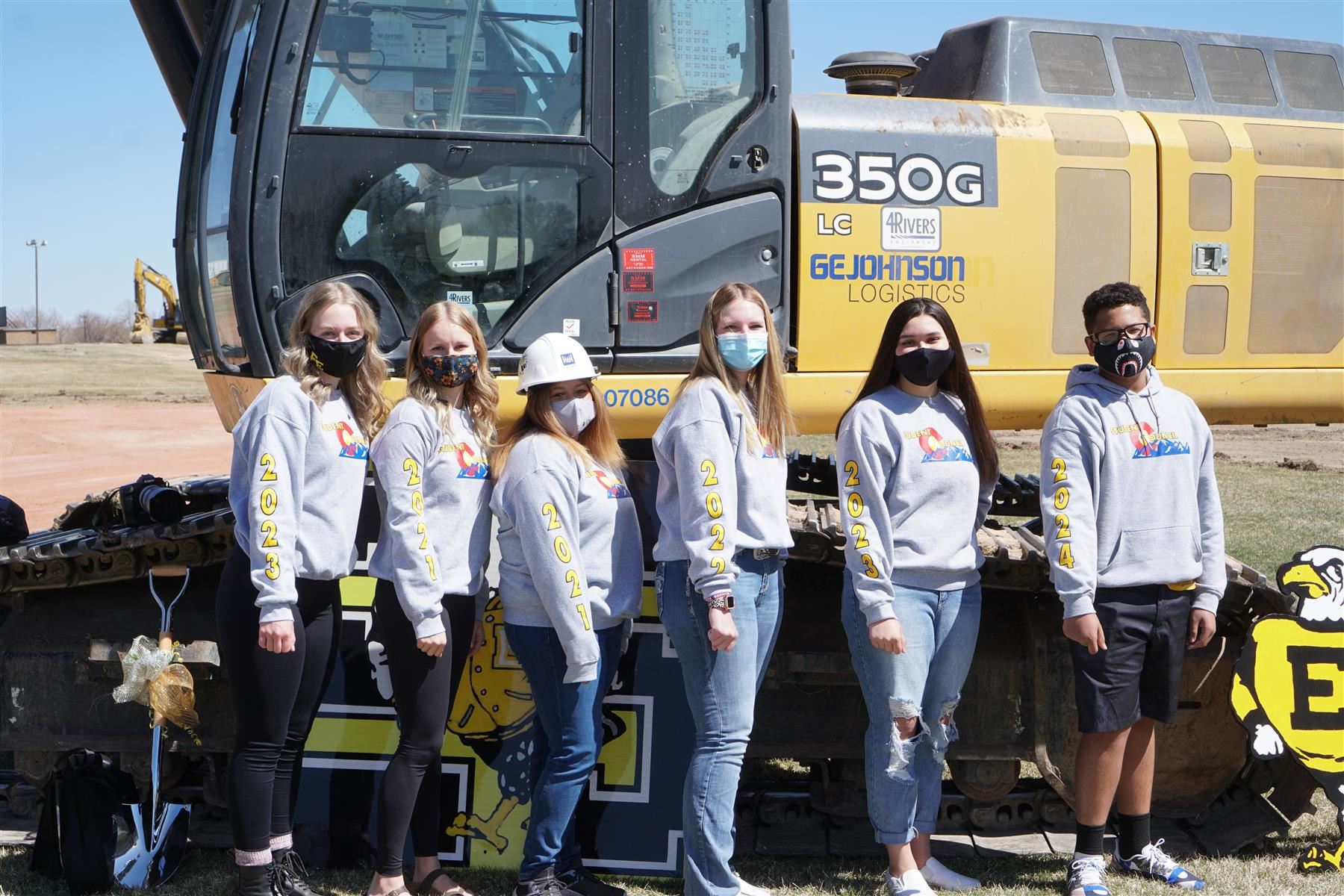 Kayla said she is looking forward to bridging the present and the future.

“It’s really special to be part of both schools,” she said. “The history of the old school will come together with the traditions of the new school starting. I’m most looking forward to what it has to offer: the new technology and safety designs.”

Ken Lane, a noted name in the annals of East’s rich history, played a vital role in campaigning for the bond’s passage and continues to serve the district as chair of the Citizen’s Bond Advisory Committee.

Like City Councilman Atencio and Kayla, he was overjoyed with the unfolding of events Thursday.

“I’m very proud of this moment,” Mr. Lane said. “It’s not only great for the East community but for the City of Pueblo. There is a great tradition here and it was hard-fought to keep this school open by successfully passing the bond.

“And in all my years of government and political work, this is one of my proudest moments: getting the bond passed and seeing the ground broken today.”

As Superintendent Charlotte Macaluso used her ceremonial shovel to turn over a small parcel of dirt, she had assistance from little Corran Montez.

Corran’s mother Reina, a beloved Assistant Principal at East, suddenly and tragically passed away in September 2020.

“I’ll bet you’re going to be an East Eagle one day,” Dalton Sprouse, the district’s Director of Communications, told the shy but sweet boy before the shovels entered the dirt.