Love of her Husband and Teaching Brought Lisa Horton to Pueblo

Lisa Horton started out on life’s road set on becoming a business mogul. 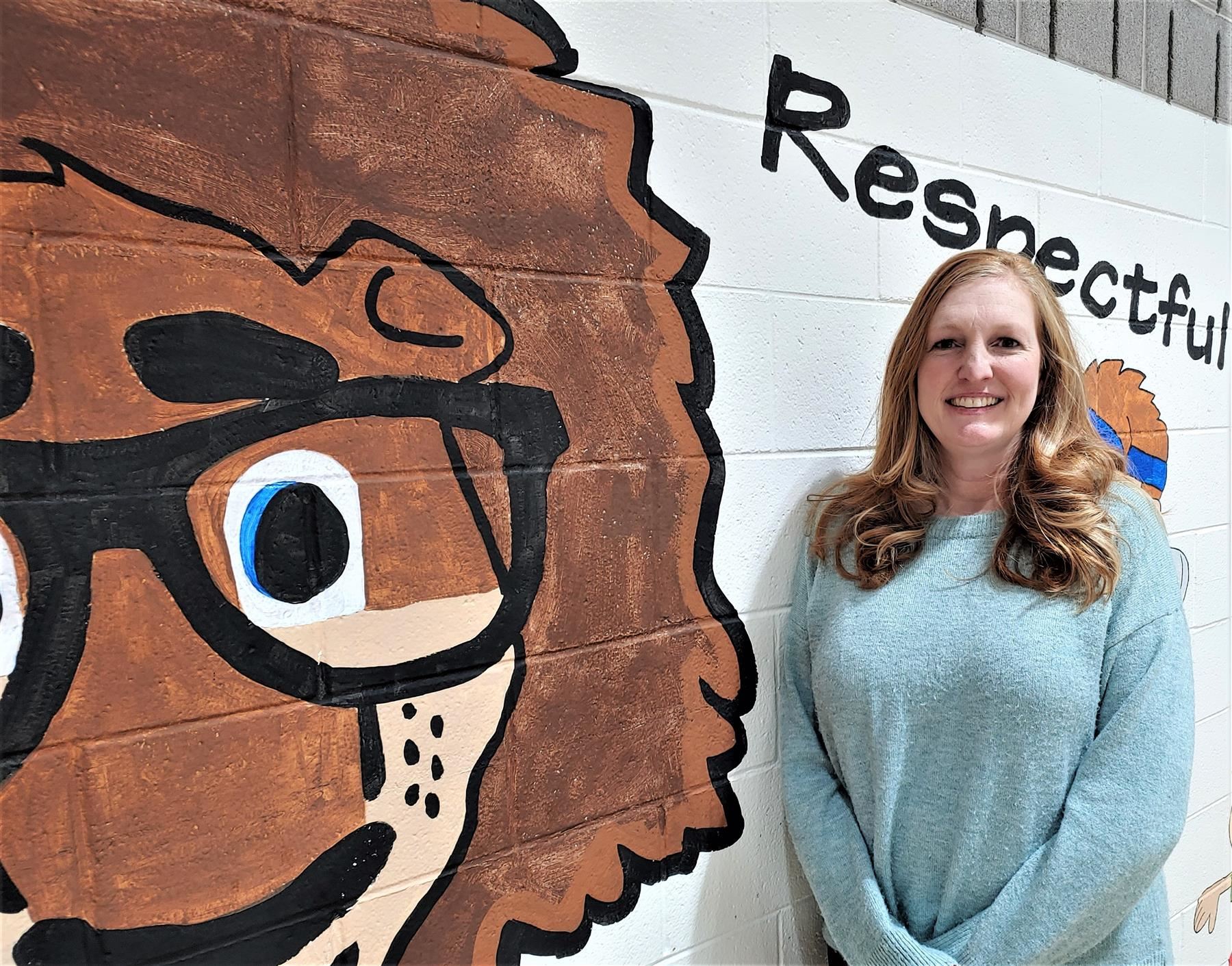 Although both parents were educators, it was her father’s bookstore business that Mrs. Horton gravitated to, and she vowed to set the business world afire as a high-achieving mogul.

But after a detour into a professional recording studio to cut a Christian record, Mrs. Horton came to the realization that the classroom, not the board room, was where her future would be found.

Today, the Texas native with a love of dancing and music leads the K-3 Fountain International Magnet School with a compassionate touch and lively spirit that’s endeared her to the young Lions, their families and her staff.

Principal Horton grew up in Conroe, Texas, just north of Houston. Despite her parents’ focus on education, and her own memorable experiences as a schoolgirl, Principal Horton pursued a business course of study in college.

While in college in Oklahoma City, Principal Horton engaged in community service work, and that led to her leaving business studies to pursue a degree in Social Work.

“I decided I wanted to change the world that way,” she said. “But I also decided to get a secondary in Elementary Education.”

The education classes eventually took precedence, and together with her love of children and the family legacy, rekindled a fiery passion for teaching Principal Horton didn’t realize she owned.

“I just kind of ran from my destiny, if you will, because at that time I was going to change the world through business,” she said.

“I knew I wanted to teach elementary kids,” she said. “At that age, they are open and ready to learn, and their eyes are open to the world. They are just like sponges who soak everything in.”

As a teacher, Principal Horton had a special interest in spreading the joys of reading.

“That’s my passion,” she said. “I fell in love with reading when I read a biography of Amelia Earhart, and just started reading like crazy after that.

“And in first grade, you really get to teach reading. At the elementary age, we try to relate reading to everything: you read when you order at a restaurant; you read when you’re driving; you read books for fun. It’s not something to be scared of but rather, it’s a gift that you can give yourself.”

Principal Horton embraced her role as an educator and quickly realized that teaching was going to be her life’s work.

“This is what I was meant to do,” she said. “It was my natural ability that I had run from for years.”

Principal Horton remained in that 1st Grade classroom for 7 years. A lifelong musician with a vocal talent, Principal Horton nearly found her way onto a different career path when she was “discovered” while singing in church.

“The pastor told me, ‘I know a producer who lived in Nashville. Would you be interested in recording?,’” she explained. “I was 25 and single, so I accepted the offer.”

Together with the producer, Principal Horton – who was going through a difficult time in her life –selected a host of Christian songs that spoke to her.

“I recorded a full album and they are still playing those songs in Houston,” she said. “My Mom continues to call me from the car to tell me, ‘You’re on the radio.’”

While reconnecting with her college roommate while visiting Pueblo, Principal Horton met the roommate’s brother, and any hopes of becoming the next Amy Grant of the Christian music world gave way to love.

“I was still teaching in Texas while we dated for three years,” Principal Horton said of the man who would eventually become her husband. “I fell madly in love with him, and I could either marry him or try to pursue music. But I really felt I wanted to move to Pueblo to be with him and make a life.”

Principal Horton felt an immediate connection to the Pueblo community and quickly resumed her educational career at Minnequa Elementary School, where she spent the next 9 years.

“My experience there was wonderful,” she said. “The staff was amazing and we had a really good leader who nurtured us. The kids were very welcoming and accepted me as an outsider, and I felt very warm there.”

To capitalize on her love of reading, Principal Horton accepted a position as a Reading Interventionist at Fountain International Magnet School. Then, when that position was phased out, she re-entered the classroom, eventually teaching 6 years at the International Baccalaureate school.

Like Minnequa, Principal Horton felt at home at Fountain.

“I loved the school. It’s a really strong community and I really liked the IB background, because of its focus on the ‘whole child’ and opening their eyes to the world around them,” she said.

Having earned a Master’s degree in Curriculum and Instruction from the University of Houston, Principal Horton was ready to test the leadership waters.

“The longer that I taught, and the more professional development that I had, I realized there was a whole other world of education,” she said. “And it just kind of developed into a dream that one day, I could lead a building.

“So I kind of dipped my toe in the administrative waters as a Dean of Students at Beulah Heights Elementary.”

The Dean position provided ample experience that allowed Principal Horton “to get a look at all the sides of education: kids, parents, community, and working as a team to help kids be successful,” she said. “I was ready to learn something new, and that was the opportunity to do so.”

After two years as Dean, the Principalship at Fountain became available, and Principal Horton felt a yearning to return home.

“I’ve loved all the schools I’ve worked at, but the IB here really caught me,” she said. “So I kind of threw my hat in the ring so that I could come home and be with my people.”

Home, they say, is where the heart is. And in 2018, Principal Horton returned to the East Side school that had captured hers.

“When they told me I had been named Principal, I said, ‘No way.’ Then it was an overwhelming feeling of gratitude and a desire to continue the great reputation and legacy this building has for offering the IB education,” she said.

“I was looking forward to the challenge of leading the building and making an impact on not only students, but families as well.”

From the outset, Principal Horton touted the merits of the inclusive IB curriculum, which encourages children to inquire and pursue subjects that interest them, and to take an active interest in the betterment of their community.

“For me, it was a bigger picture beyond just math and reading,” he said. “I just love IB so much and want others to as well.”

In a classroom, a teacher is entrusted with running multiple systems. But as Principal, the leader is expected to oversee a host of systems on a much larger scale.

As Principal Horton began her tenure, the burden of that responsibility was lessened through the dedicated efforts of the Fountain team, which welcomed Principal Horton with open arms and embraced her approach to leadership.

Now in her third year leading Fountain, Principal Horton said that despite notable changes within the world as well as the district, “We’ve managed to train global leaders and hopefully, impact this generation to go out and change the world for the better. That’s what I’m most proud of.”

It’s Principal Horton’s hope that she is known to others as being “kind, gracious, always willing to learn, and that I was always there for them: especially the kiddos.”

It’s her nurturing nature that serves as the foundation of the relationships built with students and staff.

“In my job, I have to do discipline as well, but when you have a strong relationship with the students, you can impact them, coach them and hopefully, give them hope to come back tomorrow to make it a better day,” Principal Horton explained. “And the relationships with adults are equally as important.”

Central to that team approach are the parents of the Lions, who each commit 18 hours of volunteer service to the school each year.

“We all work together to make our students successful,” Principal Horton said. “The parents are very involved here, and we are very blessed with a strong community. To me, our school feels like a ‘big hug’ when you walk in, and I want everyone who comes into our school to feel that way.”

The team approach, Principal Horton believes, has led to Fountain earning and maintaining a Performance rating.

“I have a dedicated staff that works above and beyond to make sure that kids are learning what they need to learn,” she said. “I also believe the extra layer of support from the parental community is a factor. We just work hard, every day: like all educators do.”

Principal Horton said she has no regrets over the life choices that led her to Pueblo and Fountain International Magnet School.

“Being a teacher is a wonderful gift, and I wouldn’t change anything,” she said. “I probably could have pursued music from Pueblo, but I got caught up in my teaching and my family, and I never looked back.

“I do karaoke some, but I left that dream for education and the family life.”