As Principal of Sunset Park, John Hull Exemplifies What it Means to Be a Leader 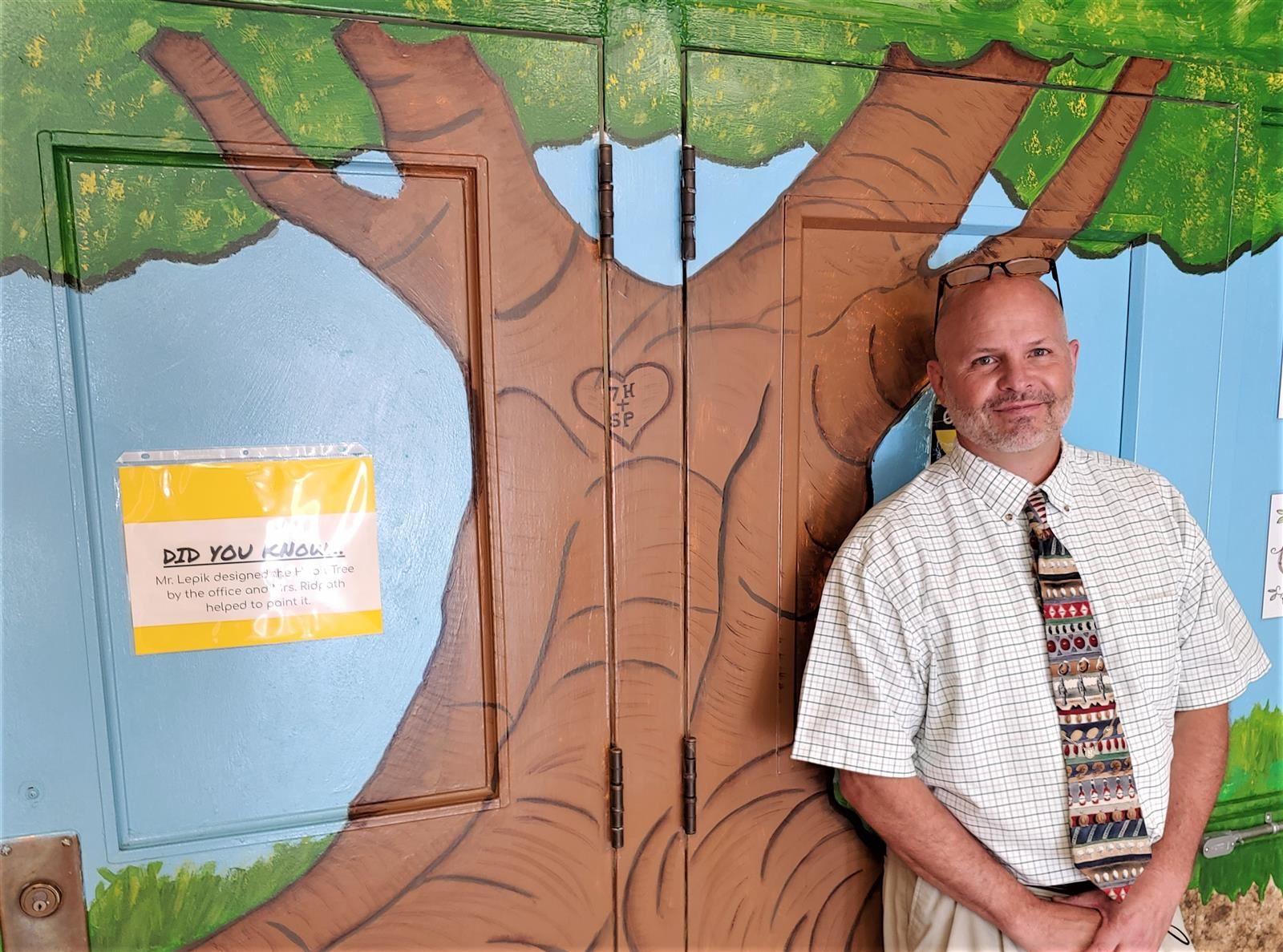 As a confident, high-performing athlete as well as a coach, there is little question that Alaska native John Hull was born to lead.

It’s fitting, then, that when Mr. Hull assumed the Principalship of Sunset Park Elementary School, he instituted the Leader in Me curriculum, which has proven to be instrumental in transforming the culture of the South Side institution.

Based on Stephen Covey’s book “The 7 Habits of Highly Effective People,” Leader in Me relays the principles of leadership and success while creating a culture of student empowerment and high academic achievement.

Uniting students, staff, and families around a common goal of preparing all Sunset Park Yearlings for college, career and life, Leader in Me is credited with instilling a sense of confidence, empathy and commitment in the Yearlings.

“Leader in Me demonstrates what successful people do, no matter what color they are, or what circumstances they come from,” Principal Hull said. “It’s not about judging: it creates a common language for the kids, the staff and even the families.”

With that designation, Sunset Park is a model institution for the showcase of Leader in Me and the vast benefits it affords scholars.

“And to get there in 3 years is virtually unheard of. In fact, you can’t do it any earlier than that. It said a lot about our commitment.”

With Yearlings finding their voice and individuality by serving as building and school community ambassadors and taking ownership of their education, the Leader in Me has allowed Principal Hull to, in a sense, relinquish a portion of the reins.

“As a staff, we’ve released some of the control we used to have,” Principal Hull said. “We’ve realized that if you let kids do the leading, they can and will, and will blossom and flourish even more than you thought they could.”

At Western State University in Gunnison, where he played football, Principal Hull pursued science studies, with an eye toward a career in sports medicine. He also served as an assistant wrestling coach at Gunnison High School.

After deciding against the sports medicine pathway, Principal Hull focused on the productive and enriching interactions that came with coaching young men and elected to make education his career.

The fact that his mother was a middle school art teacher, and his father a locksmith for a school district in Alaska, solidified that decision.

“I fell in love with working with young people,” he said. “And it blossomed from there. It just felt that education was in my blood.”

Certified to teach kinesiology (physical education) and science in grades K-12, Principal Hull – at this point married to a Pueblo native – began his teaching journey in Idaho.

“At that time, there were just no teaching jobs in Colorado,” he explained. “In Idaho, I was split between two different middle schools and was coaching at one. It was an opportunity to help a lot of kids, and I enjoyed it, but it didn’t pay worth a darn.”

After five years in Idaho, Principal Hull and his wife found positions in the Pueblo area. At Rye High School, he assumed the role of teacher, defensive coordinator for the football team and head wrestling coach, eventually spending three years there before joining the staff at East High School in 2000.

After a reduction in staff at East, Principal Hull was placed at Freed Middle School. There, working under Principal Cheryl Madril-Stringham, he began to explore the opportunities that come with building leadership.

“I learned a lot from Principal Madril-Stringham,” he said. “She helped nurture my way into administration.”

With a Master’s degree and administrative license now on his resume, and with Principal Madril-Stringham’s encouragement and support, Principal Hull entered a district-sponsored “Aspiring Administrators” program.

And after just one year at Freed, and at the young age of 34, Principal Hall began what has evolved into a 17-year tenure as the leader of Sunset Park.

“I threw my hat in the ring and said, ‘If it happens, it happens,’” he said. “And I got it. Was I prepared? Probably not. I don’t think anything really prepares you for it.

Principal Hull remembers his first day as Sunset Park’s leader as “terrifying, but at the same time, the veteran staff here was courteous and wanted me to be successful, so they allowed me to learn as I went along.”

Principal Hull relied heavily on the experience he gained through coaching as he navigated the Principalship waters.

“One of my strengths, I believe, as a coach was putting people in a position to be successful, and giving them a game plan of how to get there,” he said.

And that plan centered around Leader in Me.

“As a man and a leader, Principal Hull is amazing,” said Colleen Beauvais, a veteran 1st-grade teacher at Sunset Park. “I love the fact that he has brought a family feeling to the school, and I love that he brought us Leader in Me. To be honest, I probably still wouldn’t be teaching if it wasn’t for Leader in Me.

“It has made a humongous difference in my children and myself.”

One of the traits of a good leader is adaptability, coupled with the ability to make decisions in an ever-evolving landscape. For both Principal Hull, his staff and the Yearlings, the unforeseen global pandemic offered a challenging and trying “proving ground” for the lessons embedded in Leader in Me.

Through the pandemic and the accompanying remote learning, the Yearlings have continued producing a daily “Morning News” video segment, designed to encourage colleagues while providing an overview of what’s taking place in and outside the school building.

“One young girl was having a hard time with her WiFi, so she changed the entire news segment to anime and did it that way,” Principal Hull explained. “That’s a great example of kids finding a way to solve problems and lead in a way that works for them.

“So with the pandemic, it’s become about grit, endurance, and trying to find the positive in every situation, because there are some things this year that have been fairly discouraging.”

Over that year, Principal Hull said his overriding goal has been to support his staff and provide, as much as possible, a safe environment at Sunset Park.

“It’s about keeping all the blades spinning while keeping everyone safe,” he explained. “It’s just the nature of this year, but we don’t want to lose everything we’ve built up to this point.

“We have a very strong school community and one of the struggles of the pandemic is keeping everyone connected. When you don’t get to see everyone’s face – and I’m just the man in the box or the one making the telephone call – it’s hard for the kids.”

Principal Hull points to the fact that the Sunset Park school community recently raised $5,000 for the American Heart Association as a testament to its resilience and pride.

“In the times that we’re in, I thought if we got $1,000 we would be lucky,” he said. “But that’s just one more example of how our folks want to support the good, and they do it.”

Principal Hull touts the fact that Heritage Elementary School has joined the Leader in Me network, with Haaff Elementary also employing the principles.

“I’m proud of the fact that we can grow our influence in the community,” he said.

Thanks to receipt of a Building Excellent Schools Today grant, coupled with funds from the 2019 bond program, a new and state-of-the-art Sunset Park will, in the coming years, be built on the existing campus.

“We’ve got one more design meeting and we’ll be done with the community input piece of it,” Principal Hull said. “And then they will go back and start putting the plans together. So hopefully, folks will enjoy what the architects come up with.”

When his educational career comes to a close, Principal Hull plans to begin another line of work: that of logger/timber rancher on a family homestead in Oregon.

“When I do leave here, I hope people will feel that they were heard, that I was fair, that their kids were safe and loved, and that we did all we could to prepare them for whatever is next in their future,” he said. “And that staff felt safe, supported, encouraged and inspired.”