On a prominent space on the wall of Crystal Gallegos’ office inside Highland Park Elementary School hangs a wood carving of the word “Dedication.” 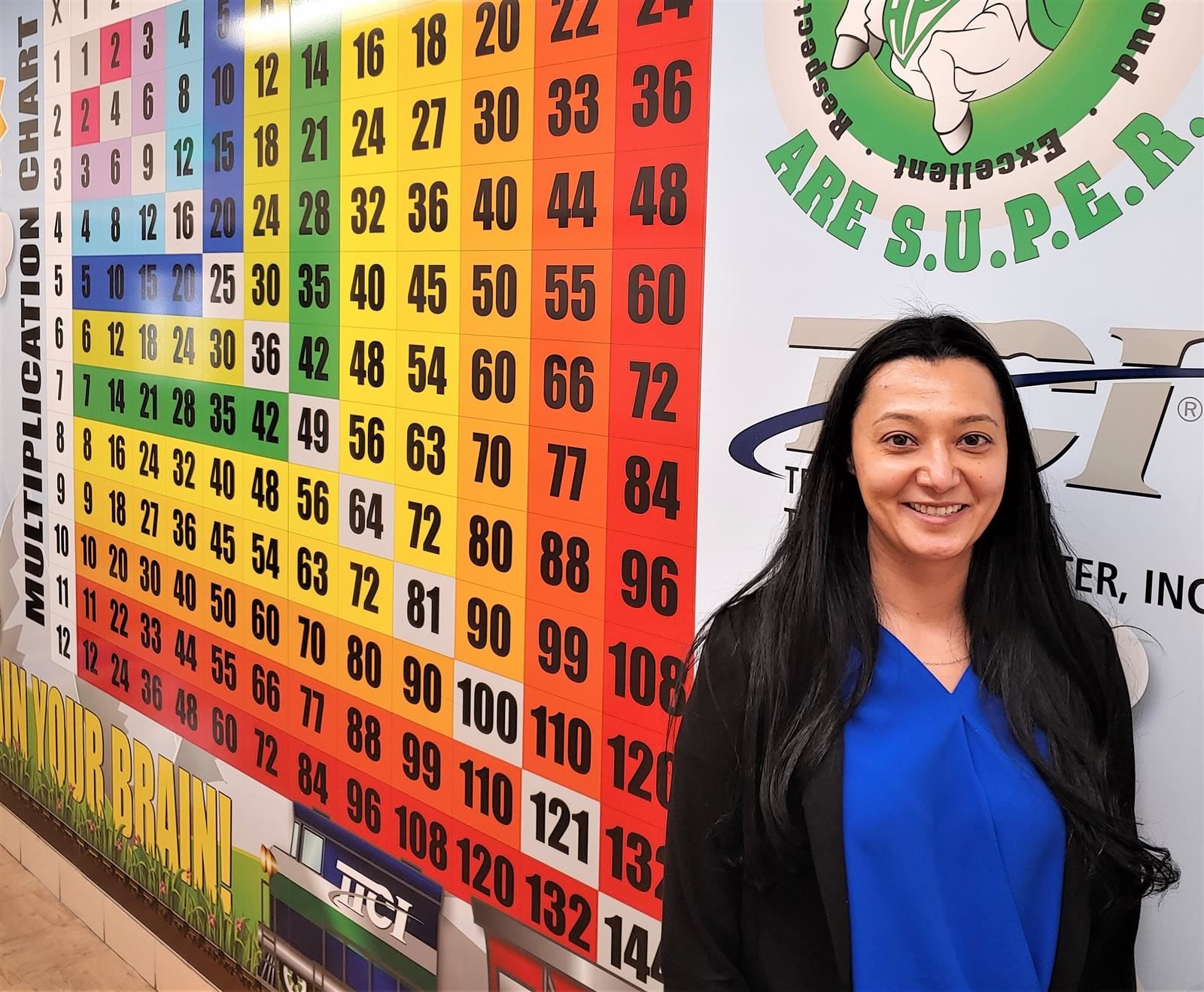 This, more than anything, defines the essence of Mrs. Gallegos’ character, heart and soul.

Nearby, are the rewards of that dedication: hand-drawn cards, letters and drawings from Stallions expressing appreciation and admiration for their amiable leader.

“Your the best prinsable ever,” begins one particularly charming pencil-written note. “Thank you for being a great prinsable. Your amaezeing, cool, awsome, nice, pretty. Your funny. Your the best.”

And while the child’s syntax and spelling is guilelessly suspect, the sentiments are heartfelt and reflective of the way the student body of Highland Park views Principal Gallegos.

Although she is at the top of the leadership chain at Highland Park, Principal Gallegos has had nothing handed to her. With a blue-collar work ethic that defines Pueblo, she ascended up the proverbial ladder through equal parts hard work, long experience and diligent study.

Underlying that work ethic is a relentless commitment to the betterment of youth, especially those who come from challenging circumstances.

Although the education field was not yet on her radar, Principal Gallegos began her life-long service to youth by first earning a degree in Psychology and then accepting a position with the Colorado Boys Ranch in La Junta, where she worked with dually diagnosed adolescent boys.

Once that position ended, Principal Gallegos was searching for a new career start. Her father, who had completed a Social Services internship at Cesar Chavez Academy, encouraged her to become a substitute teacher there while she worked out her future.

As it turned out, teaching was her future.

“I subbed for half of the fall semester and the entire spring semester,” Principal Gallegos said. “And being a new substitute teacher, I knew nothing, other than the teacher was absent and I went in and followed the lesson plan.”

By subbing from Kindergarten through the 12th grade, Principal Gallegos began to compile valuable experience as her future as a building leader began to crystalize.

“My first assignment was a wrestling class at the high school,” she said with a laugh. “It was uncomfortable, but I was able to learn what it was like to be in an elementary, middle and high school, and how to be flexible.”

While in a Master’s program for Community Counseling, and with a special affinity for children at the elementary level, Principal Gallegos was encouraged by her supervising Principal to pursue a Student Support position that had opened up at the Academy’s K-2 school.

She received it and formally began her career in education.

And working in a support role to the Principal allowed insight into a position she herself would occupy in a few short years.

After continuing in various Student Support positions for a number of years, Principal Gallegos was encouraged by the school’s Principal to pursue the licensure that would open the door to building leadership.

“At this point, I am supporting students and families and teachers, so it felt like a natural step,” Principal Gallegos said.

As she was working toward the license, Principal Gallegos began the transition into administration by serving as an Assistant Principal for the campus’ K-8 school.

“There was absolutely more responsibility,” she said, adding that keeping tabs on behavior and the instruction component was part of the AP duties. “I saw it as being able to work with students on a newer level, and the counseling part of me wanted to help them make better choices in their lives, and see that their choices – whether good or bad – have consequences.”

In 2013, Principal Gallegos earned her Principal License from the University of Colorado Denver. The following year, she advanced to the position of Principal and Director of Operations for the charter high school: a move that further prepared her for the Principalship at Highland Park, which she accepted in June 2016.

Along the way, she picked up some sage advice from her father, who sought to calm any nerves and curb any doubts.

“I was young, and I was worried as to whether people would take me seriously,” Principal Gallegos explained. “And my Dad said something I will never forget: ‘You just have to stand out. You have to make sure that wherever you are, people will know that you are the Principal by the way you carry yourself and the way you dress.’”

And every first day of school as a building leader, Principal Gallegos arrives dressed to impress, “Because I want people to know that this is who leads this school and I take pride in that.”

By now the married mother of three children, Principal Gallegos said applying for the Principalship at Highland Park was yet another “leap of faith.”

“I really wanted to know what it meant to be the Principal of one building,” she explained. “At a charter school, you wear many different hats, and don’t really have the leadership role that you do at a public school, because everyone shares it equally.”

Prior to interviewing for the Principalship at Highland Park, Principal Gallegos learned as much as she could about the STEM school.

“I applied, shared the information I did know about the school, and I got hired,” she said. “Of course, I was really excited, because I knew I would have the chance to focus on elementary students, which is really what I wanted to do.”

As she began her tenure, Principal Gallegos, with support from veteran staff, dedicated herself to learning about the STEM programming and the school’s partnership with Project Lead the Way.

“I had a lot to learn about the building and what was done in the years before I arrived,” she said.

In her second year as Principal, Highland Park entered Turnaround status, which resulted in a shift in the instructional delivery.

“We knew that our students were not Turnaround students,” Principal Gallegos said. “And so we started working on our instruction in Math and English Language Arts, and we’ve continued to work on that for the last three years: really narrowing in on how this learning has to take place and making sure students get what they need.

“And it’s really disheartening, because we haven’t been able to take CMAS for the last two years. But the teachers and staff in this building want our students to succeed and know our students have it in them. And I know that once we are able to take tests, we will show everyone our students are where they need to be.”

Principal Gallegos describes the community and culture at Highland Park as “very positive,” which she attributes to the efforts of her staff as well as open communication with the families of Stallions.

“Our teachers work so hard, day in and day out,” she said. “They work to make sure they understand, and that students are understanding. We have targeted where our students need to be, because we need to ensure that our students – whether in-person or online – are ready for the next level.

“I’m most proud of the planning we have been doing in our Engage New York math curriculum and Wonders, our reading program. We do things as team. I don’t take a ‘top down' approach with my teachers, because it’s more about, ‘We’re going to get this figured out together.’”

Testifying to the friendly unity that defines the Highland Park staff, Principal Gallegos has been overseeing a virtual “Rock, Paper, Scissors” tournament, the progress of which is tracked on a large bracket on her office wall.

“It’s just a way to still bring us together, even though we have to stay apart,” she explained.

When asked to describe herself, Principal Gallegos quickly offers the word “dedicated.”

“I’m definitely dedicated to the families, the students and staff at this school,” Principal Gallegos. “Once I put my mind to something, it’s ‘game on.’”

The traits that define a good Principal, she continued, are the ability to be “a good listener, a supporter, and, even though you have to lead, it’s important to keep that social-human interaction intact, and have fun: especially in the time we’re in.”

In addition to supporting her children in their activities, Principal Gallegos enjoys volleyball and traveling.

She completed both a fellowship and Master fellowship with UnidosUS in the National Institute for Latino School Leaders. The fellowship's focus was on advocacy and equity for students of color.

It was during the Master fellowship in 2015 that Principal Gallegos published an op-ed entitled “Colorado Academic Standards Set the Bar Higher” in The Denver Post.