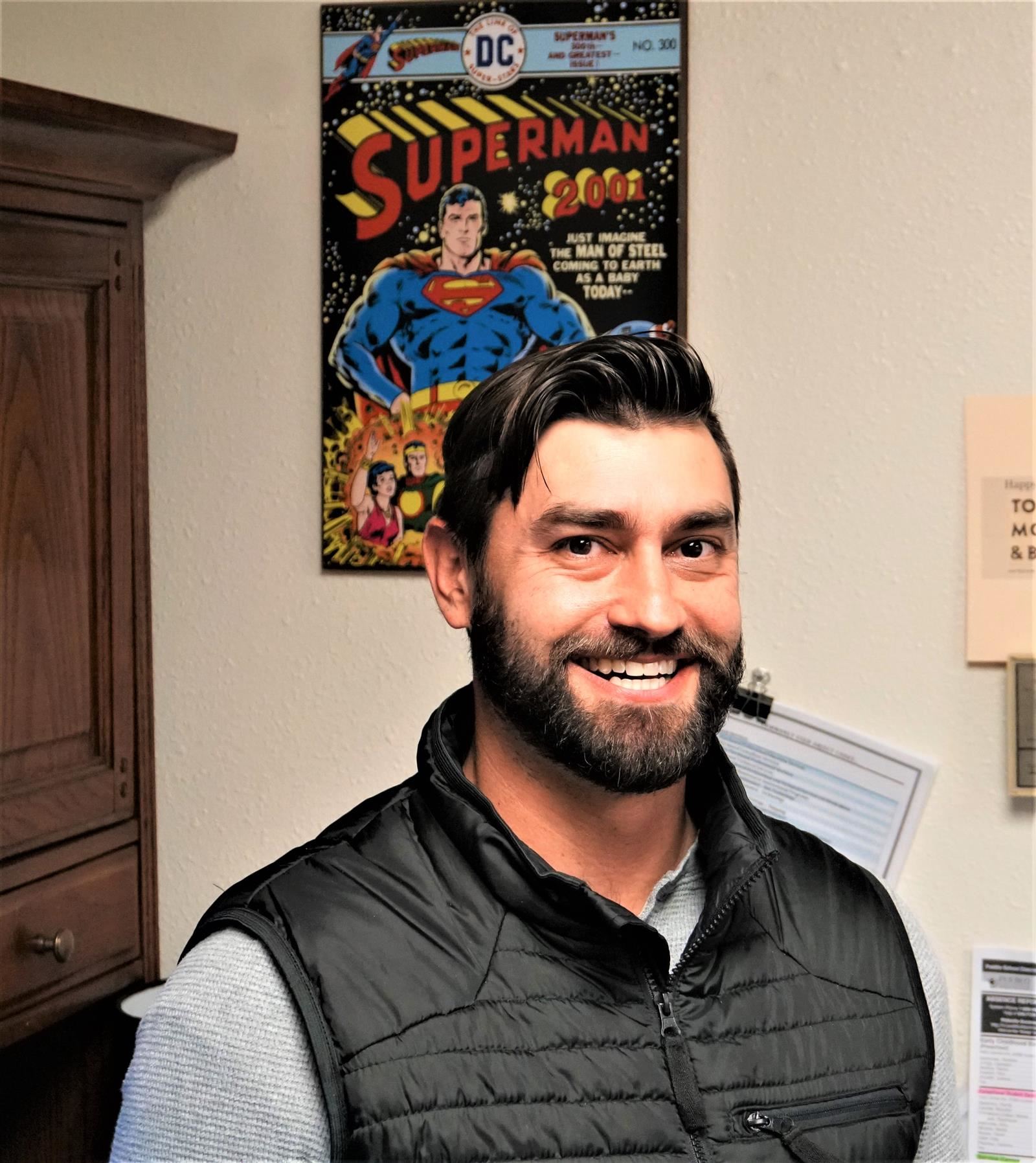 After an initial foray into music performance, Jonathan Dehn found his true voice in education.

A District 60 product who began his career as a music teacher, Mr. Dehn has served as principal of Beulah Heights Elementary School for the past six years.

His love of working with children began early in life and set the course for his future.

“I worked with the YMCA’s youth program and always really enjoyed that aspect,” he said. “But I don’t know that I really thought about it as a career until later into college.”

At the University of Northern Colorado, Principal Dehn was originally was a vocal major, with the goal of becoming a professional performer.

During his studies, Principal Dehn took a few teaching classes, which opened the door to the classroom while quietly shutting the one that led to the performance stage.

“I really fell in love with it,” Principal Dehn said of the education field.

Returning to Pueblo, he resumed his association with D60, this time as an emergency license teacher at Minnequa Elementary School.

“And I made that my home: teaching music for the next 7 years,” he said. “And I absolutely loved it.”

“When I started doing more of these ‘big picture’ items – working with Positive Behavior Intervention Support and Response-to-Intervention – I really enjoyed the challenges,” he said. “I enjoyed looking at building systems and seeing what we could do to help support all of the students within the building.”

Accordingly, Principal Dehn earned a Master’s in Educational Leadership and a Type D Administrator’s license. At Roncalli STEM Academy, he served as Response-to-Intervention Coordinator before being named Dean of Students and then Assistant Principal.

“After two years at Roncalli, I realized that I really missed elementary kids,” Principal Dehn said. “I would have loved to stay at Roncalli, too, and I really enjoyed that building and continuing to improve it. But there were some opportunities that opened up at the elementary level, and I figured I would throw my hat in the ring.”

“I was blessed to get the principalship at Beulah Heights and it’s been my home for going on six years,” he said.

The early going was not without substantial obstacles.

“When I got here, Beulah Heights was near Turnaround,” he explained. “It was struggling to find its identity, as to what it was meant to be, and struggling academically. So with the help of the teachers here, we really started to identify areas we felt we could improve and grow kids quickly.

“So we came in with a goal of continuing to build school culture: we wanted kids to love being here and for our community to feel like we are a hub, where they could come to get support and feel welcome.”

“We saw that as a need in our building and we put a lot of resources and support and behind that,” Principal Dehn said. “We built a 3-year plan behind that and worked toward becoming a Performance school.”

And at the end of those three years, the math proficiency of the young Bearcats markedly improved and the school earned that coveted Performance rating for the first time in years.

A testament, Principal Dehn said, “to a staff that really loves being here.”

“We have very low turnover,” he added. “And a large majority of our teachers who were here when I came on are still here. From Kindergarten through the fifth grade, the majority of our teams have been intact. And I think that speaks to our school community and culture when we have staff who want to be here and work hard for our kids.

“They are committed to our kids for the long-term. If we had high turnover, we’d have to restart more frequently, and it becomes a challenge.”

Despite the interruptions and disruptions caused by a global pandemic, Principal Dehn and his staff are building on the momentum created over the past six years.

“We see ourselves as continuing to improve at all levels and continuing on the trajectory that we were before the pandemic,” he explained. “We don’t want to make excuses or think that this was a lost year but rather, a year that we were able to innovate and find ways to take this ‘new learning’ and improve who we are.

“This presented so many challenges, but I think that our staff, students and community have risen to try to make the best of what we can to continue to grow our kids. We want to get all our kids back in school because we miss them: there is a genuine love of having kids in building to build relationships around and support.”

Although education became his life, music still plays a part in it, as Principal Dehn has long served as a co-director of the district’s annual Summer Musical.

“I still have ties to music and still love doing it,” he explained.

Inside Principal Dehn’s office, one will find testimonials to his love of “Star Wars” and superheroes, specifically Superman.

“I guess I’m a little bit of a nerd, and that’s OK,” he said with a big smile. “I find a lot of fun and enjoyment in still being a kid. I enjoy all of the fandoms, whether it’s Harry Potter, “Star Wars” or Marvel. It’s always a lot of fun for me.

“And it also ties me to the kids, because these are the things they continue to love, and that we can have conversations about and build relationships around.”

On a section of the office wall is a collection of Superman logos, hand drawn by students, as a tribute to the man they view as a super leader.

“I in no way feel I represent or emulate a Superman figure, so it’s just a fun thing for the kids,” Principal Dehn said.

And with that, the triumphant strains of the “Superman: The Movie” theme boldly emanate from his smartphone: his alert for an incoming call of importance.