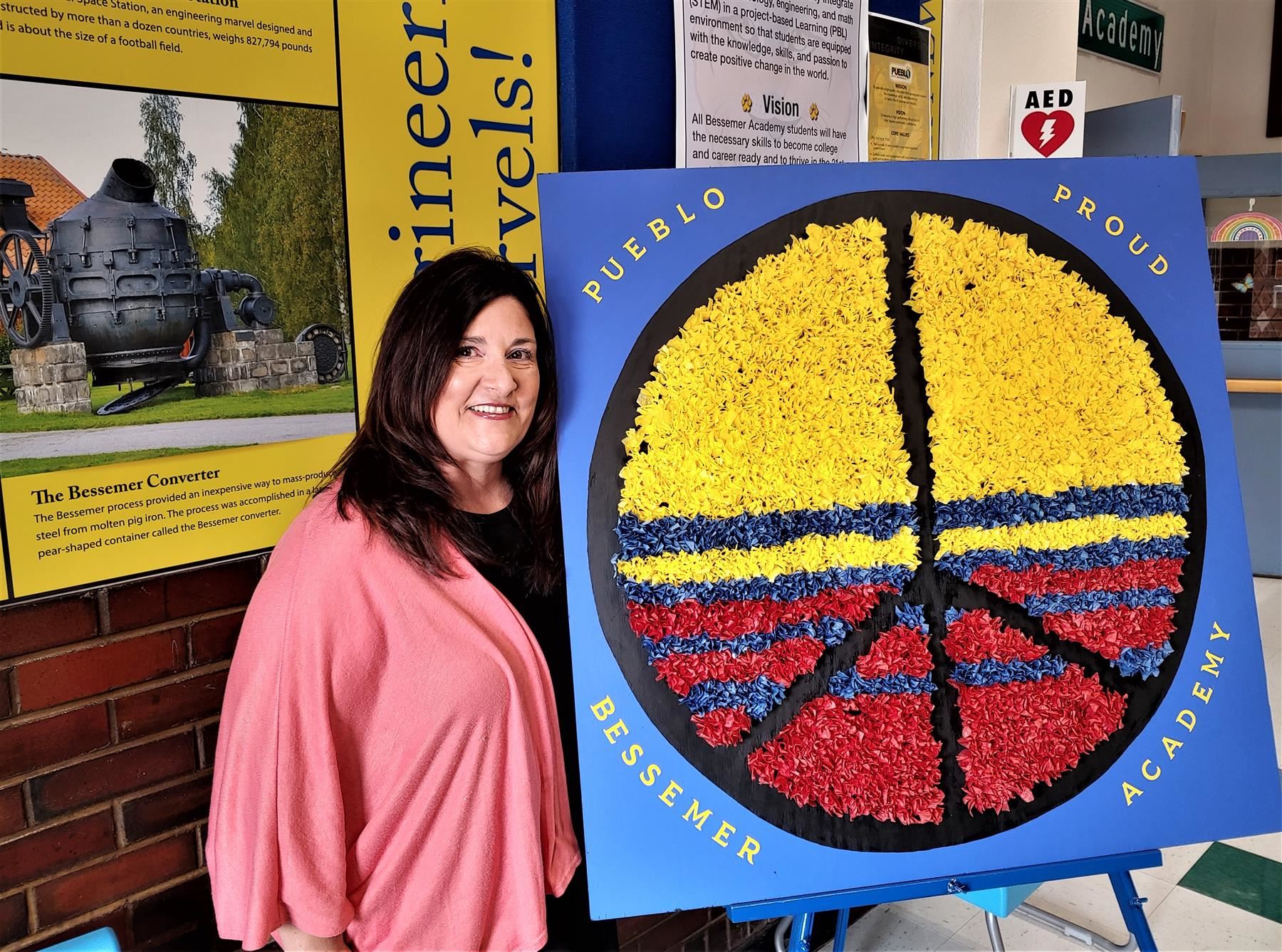 As she made her rounds through the halls of Bessemer Academy, Angela Garcia’s ever-present smile broadened just a bit as she passed a cute-as-a-button Kindergarten tyke.

“That’s the Mom of the School,” the little one said, pointing out Ms. Garcia to her friends.

Within that child-like, heart-felt compliment was the endearing summation of Pueblo native and D60 product Angela Garcia’s tenure as Principal of the school.

Although she entered the education field through the back door, Principal Garcia has employed her nurturing maternal instincts, kindness and compassion, and a fervent desire to see all the children under her watch flourish to become a respected building leader in just two short decades.

After her first career as a stay-at-home mother of two children – both of whom graduated from South High School and later earned college degrees – Principal Garcia, with no real intention of making education her career, took a part-time job as a Title 1 assistant at Irving Elementary School.

“I took that job because I was able to take my kids to school, work, and then pick my kids up,” Principal Garcia said.

At Irving, a teacher who sensed the compassion and concern inherent in Principal Garcia asked her to begin working with at-risk youth.

“And from there, I just really fell in love with working with children,” she said. “At Irving, I was working alongside great teachers, and that eventually inspired me to become a teacher.”

Already the owner of a business degree, Principal Garcia returned to college to pursue a degree in Psychology with a certification in Elementary Education.

“As I was studying to become a teacher, I felt myself really drawn to the youth at risk,” she explained. “At the time, I was Pueblo’s first Court Appointed Special Advocates (CASA) volunteer, and worked with abused children there.

“So I’ve always known that advocating for them, and making a difference in their lives, was something I needed to do.”

Principal Garcia began her teaching journey in 1999 at Heritage Elementary School, where she served as a Reading Interventionist.

“It was an amazing experience: we had great students and great teachers,” she said. “And wonderful mentors.”

For 14 years, Principal Garcia served at Heritage in a host of capacities. Inspired by the dedicated staff she worked with, she eventually returned to college to pursue a Master’s degree in Educational Technology.

She was then encouraged by a building leader who saw in her the makings of a strong administrator to think about a Principal’s License.

“At that point, my response was, ‘I don’t want your job,’” Principal Garcia said. “I loved being in the classroom.”

But after another Principal pushed her to obtain that License, Principal Garcia consented and returned to school to earn the Educational Leadership credential.

“And once I received that, I moved over to Bessemer Academy in 2014,” she explained. “Initially, I was the instructional coach, but once the Principal found out I had my Educational Leadership certificate, she moved me over to Dean of Students.”

As Bessemer Academy’s Dean, Principal Garcia quickly endeared herself to the Bobcats and their families, and vice versa.

“The kids here are amazing. The parents are amazing,” she said. “And although it was a shift from Heritage, the purpose was the same: do the best for kids.”

The duties that came with being Dean – professional development, handling of behavior issues, developing a rapport with the school community – were embraced by Principal Garcia as she fully immersed herself in the welfare of the Bobcats.

“In the year before I came here, there were more than 500 behavior referrals,” she explained. “And within my first year here, we knocked that down to half, and it’s since dropped significantly.”

Through a collaborative approach that reinforced the mantra that at Bessemer Academy, “Every Child Matters,” a strong sense of belief began to envelop the scholars.

“From the time I started here, so many things have changed, with the biggest being that the kids now believe in themselves,” Principal Garcia said. “When I started, the kids were very resistant. You would give them things to do and they didn’t want to do it, because they felt like they couldn’t do it.

“Creating that climate and culture of belief here is what I’m most proud of.”

In 2017, the Principalship of Bessemer Academy became open, and Principal Garcia was ready to step up into it.

Ironically, Principal Garcia was in attendance at the D60 Board of Education meeting at which the announcement of her ascent to Principalship was to be announced when she received a phone message relaying the coveted news.

“I was at the meeting presenting our Innovation Plan, because at that time we were transitioning into an Innovation School,” she explained. “And I received the call that said, ‘Congratulations. You have received the Principalship.’

“But I couldn’t be excited, because I was at the meeting. Then shortly after that call, the board announced it.”

One of Principal Garcia’s first objectives as Bessemer Academy’s leader was to build a strong and caring team that would fully commit to the betterment of the Bobcat student body.

“I wanted only those people who believe in kids,” she said. “And my team is amazing. Every single teacher that works here is willing to do what they need to do that’s best for kids. In fact, we don’t call ourselves a team: we call ourselves a family.

As Bessemer Academy is a STEM School, it was Principal Garcia and her team’s vision to transition into a Project-Based Learning school where all content areas – English Language Arts, math, social studies, science, art and physical education – “integrate authentic learning experiences that make learning meaningful and impactful for our Bobcats,” she explained. “From past experiences, as well as currently, we implement one Standards-Aligned PBL unit into the school year.”

This focus on hands-on learning, and the creativity that accompanies it, has reaped great dividends for the Bobcats.

“The excitement, ownership and depth of knowledge that come from these PBL exhibitions shows remarkable evidence that true learning from the teacher and the student took place,” Principal Garcia said.

In order to increase academic achievement, Principal Garcia and her team have taken a hard look at data “to find out the exact needs of students,” she said. “We are giving them exactly what they need to achieve. When I came to Bessemer Academy, the school was in its sixth or seventh year of Turnaround. In my first year as Principal, we came out of it.

“And although we dropped a little bit the following year, we are working hard to come back.”

Attesting to the inclusiveness that defines the school, Bessemer Academy is home to an All Accessible Playground: another point of pride for Principal Garcia.

“When I came here, we had no playground,” she said. “For lunch, the kids would walk the track. Since then, we’ve worked hard to get this playground. Two of the teachers wrote the grant that allowed us to get what I believe is the only Inclusive Playground in Pueblo.

“That’s just another way we meet the needs of our students.”

“But I also love flowers and gardening,” she added.

That love, however, will never surpass that which she feels for the Bobcats.

“I hope I will be remembered for loving our kids and being their greatest advocate and supporter,” she said. “I only want to give our kids everything they need to be successful in life. We tell our kids you don’t have to go to college to be successful. Maybe they will take over a business, or go to a trade school.

“It’s my job to believe in them so that they can accomplish what they set out to do. Everybody is somebody here at Bessemer Academy. Everyone is welcome and we treat every Bobcat with kindness, love and acceptance.”

On a wall inside Principal Garcia’s office, as well as throughout the school, is posted this saying: "Be the change you want to see in the world."

Its presence is not mere happenstance.

“That is truly what I live by,” Principal Garcia said. “Being a positive change agent for all of my team, students, and families at Bessemer Academy is what I strive for: by not only saying the words, but facilitating, organizing, and supporting any and all actions that are necessary to support and create the overall growth and success of all.”